Mr Sunak said the move will benefit accommodation in hotels, B&Bs, campsites and caravan sites, while attractions such as cinemas, theme parks and zoos will also see the tax cut.

The temporary VAT cut does not include alcoholic drinks, the Treasury’s “plan for jobs” document said.

Mr Sunak added: “This is a £4 billion catalyst for the hospitality and tourism sectors, benefiting over 150,000 businesses, and consumers everywhere – all helping to protect 2.4 million jobs.” 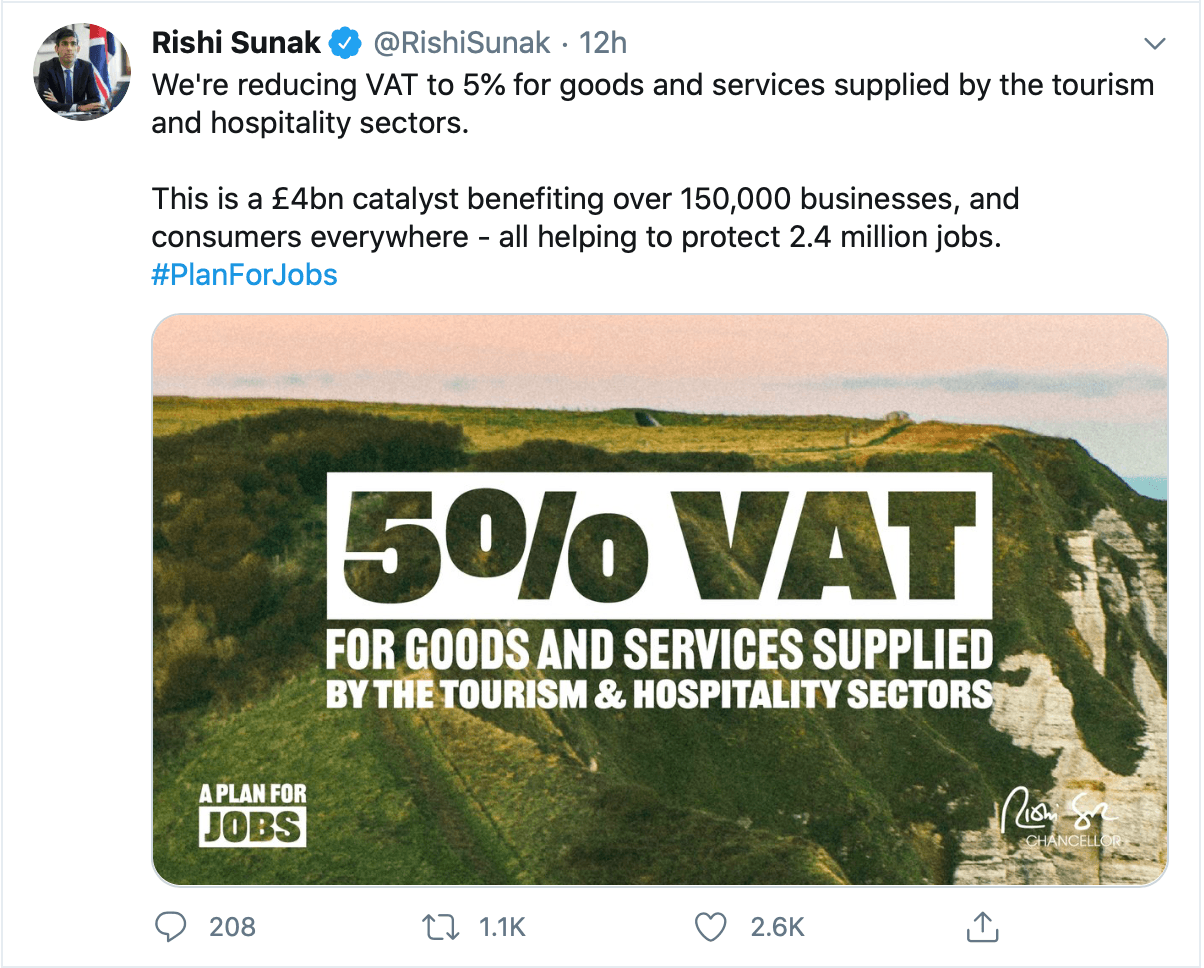 Companies to get £1,000 for every furloughed worker they bring back to work

Rishi Sunak has announced a new ‘jobs retention bonus’ that will see businesses receive £1,000 from the Government for every employee brought back from furlough and kept on through to January.  My issue for this is that  the £1,000.00 bonus who will really benefitmfrom it? The small enterprises with few staff or a larger one with 10000 staff that they would have brought back anyway?

The Chancellor said that if firms bring back all nine million people who have been temporarily laid off then it would amount to a £9 billion policy. He added: ‘Our message to business is clear: if you stand by your workers, we will stand by you.’ However, Mr Sunak stressed that ‘it is vital people aren’t just returning for the sake of it’, adding that each worker ‘must be paid at least £520 on average, in each month from November to the end of January – the equivalent of the lower earnings limit in national insurance’.

Mr Sunak added: “This is a £4 billion catalyst for the hospitality and tourism sectors, benefiting over 150,000 businesses, and consumers everywhere – all helping to protect 2.4 million jobs.”

The Chancellor also announced plans to give people a 50% discount, up to £10 per head, to eat out in restaurants in August. Every Brit will be given discounts for restaurants to help save the hospitality sector. The ’eat out to help out’ initiative offers customers up to £10 per head off their bill when dining out on Mondays to Wednesdays next month 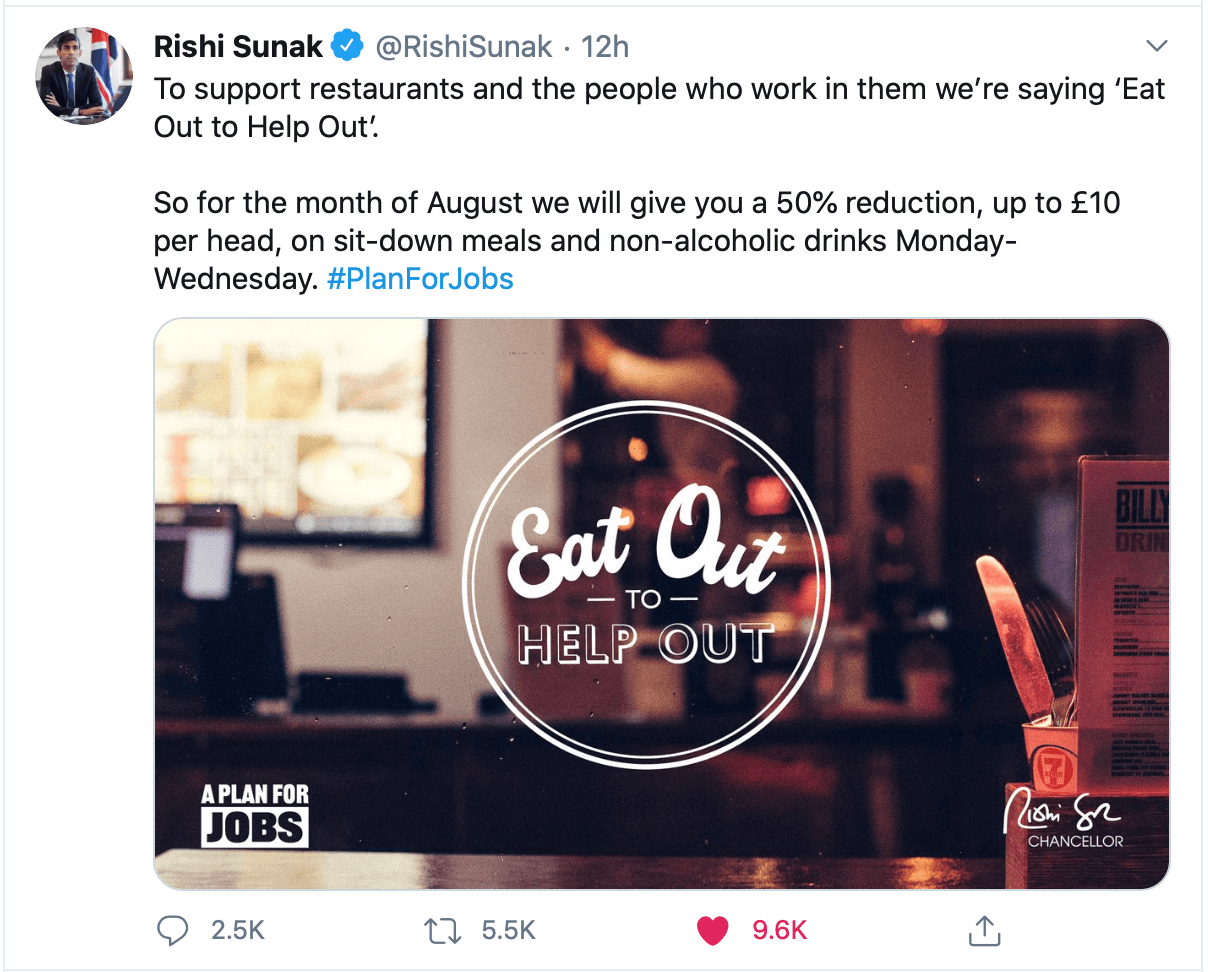 Contracted by 25% in two months

The Chancellor told ministers the UK economy ‘contracted by 25%’ in two months – ‘the same amount it grew in the previous 18 years’. But he said the Government has not ‘done everything we have so far just to step back now and say “job done”’, adding: ‘In truth, the job has only just begun.’

The ‘jobs retention bonus’, he added, will reward and incentivise employers who bring furloughed staff back. Mr Sunak said the Government’s jobs retention scheme ‘cannot and should not go on forever’, telling MPs: ‘I know that when furlough ends it will be a difficult moment. I’m also sure that if I say the scheme must end in October, critics will say it should end in November. ‘If I say it should end in November, critics will say December.

But the truth is: calling for endless extensions to the furlough is just as irresponsible as it would have been, back in June, to end the scheme overnight. We have to be honest.’

He said that ‘leaving the furlough scheme open forever gives people false hope that it will always be possible to return to the jobs they had before’, while the longer people are laid off ‘the more likely it is their skills could fade, and they will find it harder to get new opportunities’. The Chancellor added: ‘It is in no-one’s long term interests for the scheme to continue forever – least of all those trapped in a job that can only exist because of Government subsidy.’ 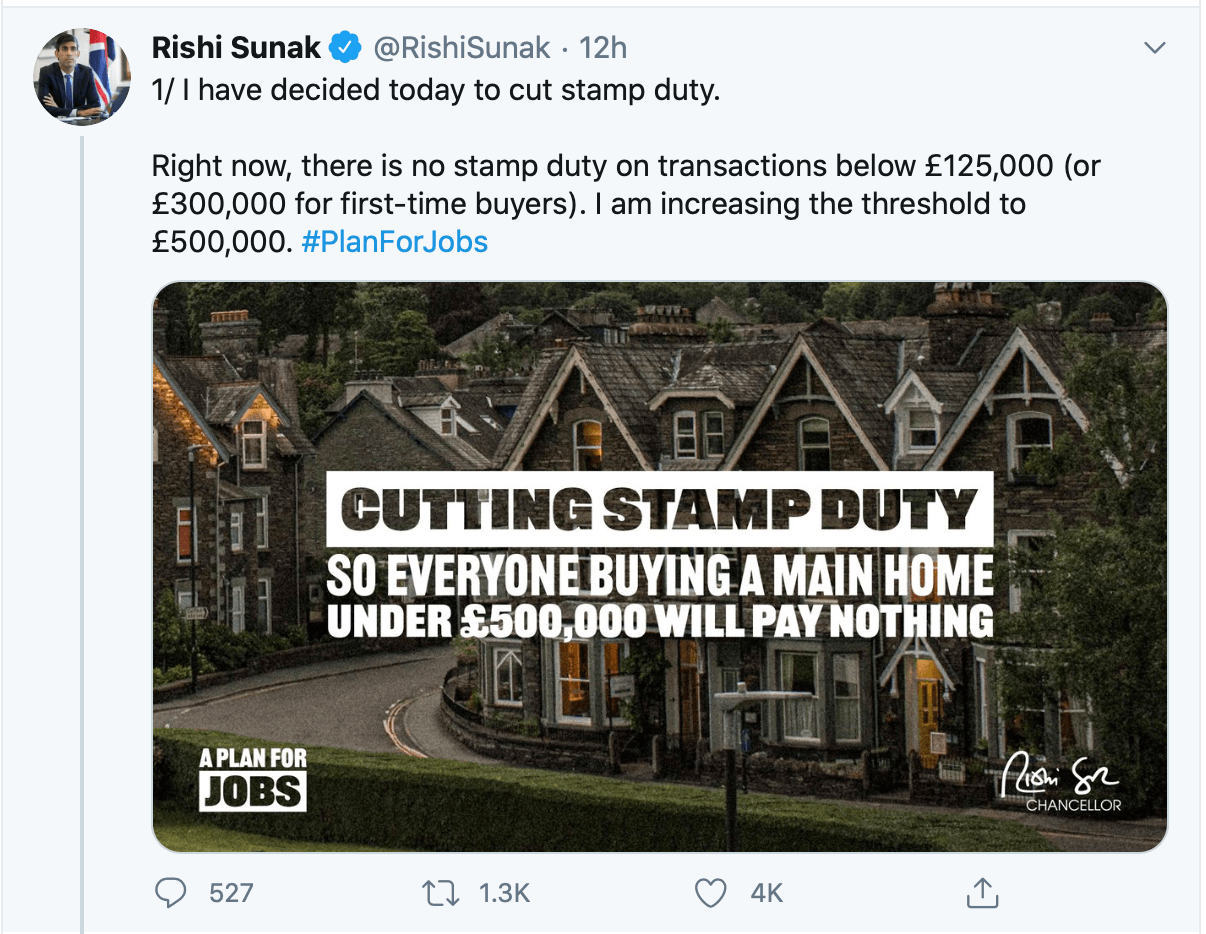 Massimo’s career has grown up through the restaurant world, starting as a waiter through to high-end restaurant openings within an operational management capacity. This depth of experience has allowed him to understand the business from both a guest’s needs to what a team needs, giving him the benefit of an all-rounded view and approach to problem solving.